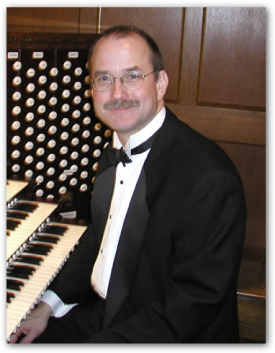 H. Joseph Butler is Professor of Music and University Organist at Texas Christian University in Fort Worth, where he also serves as Associate Dean of the College of Fine Arts.

An active member of the American Guild of Organists for over thirty years, Butler was winner of the New England Regional AGO Competition in 1975 and performed as a finalist in the National Organ Playing Competition in Boston the following year. He was founding dean of the Southeast Ohio Chapter AGO and holds the Associate (AAGO) Certificate.

Dr. Butler has performed widely in the United States and England, including conventions of the AGO and the Southeastern Historical Keyboard Society, and the cathedrals of Canterbury, Liverpool, Leeds, Ripon, and Chester. He recently performed recitals at Hong Kong Baptist University and the Hong Kong Cultural Centre, where he also taught a master class on the works of J. S. Bach.

His research focus is Baroque keyboard music, with emphasis on the French Classic tradition, J. S. Bach, and colonial American keyboard music. He has published articles and reviews in The New Grove Dictionary of Music and Musicians, Organ Yearbook, The American Organist, The Tracker, Choir and Organ, American Music Teacher, Bach, and Early Keyboard Journal. His book, The Peter Pelham Manuscript of 1744: An Early American Keyboard Tutor, is published by Wayne Leupold Editions.

He has recorded for Pro Organo Records and has been heard on the NPR syndicated program Pipedreams. His latest CD, the first-ever recording of the complete keyboard works of Julius Reubke, in collaboration with John Owings, pianist, is available from Pro Organo/Zarex Corporation.