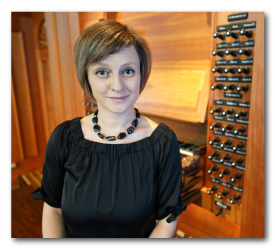 In her recital programs Ilona Kubiaczyk-Adler explores connections between early and contemporary music, the works of underrepresented composers, the music of Eastern Europe, and improvisation. She has traveled, mainly as a performer, through most of Europe, and South and North America. Ilona’s most exciting professional engagements happened at the Oude Kerk, Nieuwe Kerk, Orgelpark and Van Gogh Museum in Amsterdam, the Sint Laurenskerk in Alkmaar, the Issue Project Room in New York, “Right Brain Rising!” festival in Arizona, “Musica Moderna” festival in Łódź, with the US Air Force Strings at St. John’s Episcopal in Washington DC, at the Göteborg International Organ Academy in Sweden, and Westfield Conference at Cornell University in Ithaca, NY. For years she has been traveling and exploring historical organs in Europe and is fascinated with the historically informed organ building in the US.

Ilona Kubiaczyk-Adler currently serves as the Director in Ministries in Music and Arts / Organist at Pinnacle Presbyterian Church in Scottsdale, Arizona, where she supervises a large music program with adult, youth, and children choirs, instrumental ensembles, the Pinnacle Concert Series, and plays the masterful 2006 Richards, Fowkes op. 14 organ.

She worked as an Assistant Professor of Organ at the Academy of Music in Łódź, and as a Research and Teaching Assistant at Arizona State University. Her 2015 album "Antique Sound Palette", recorded on the 1719 Hildebrandt organ in Pasłęk, as well as recordings made on the Richards & Fowkes organ at Pinnacle Presbyterian Church were featured on the American Public Radio program "Pipedreams."

Ilona graduated from three conservatoria: Academy of Music in Łódź, Poland (Master of Arts), Conservatorium van Amsterdam, the Netherlands (Master of Music), and the School of Music at Arizona State University in USA (Doctor of Musical Arts). Her main teachers were Kimberly Marshall, the late Jacques van Oortmerssen, Irena Wisełka-Cieślar, and Grażyna Fajkowska. While in college she traveled to participate in masterclasses and private lessons with: Olivier Latry, Guy Bovet, Ludger Lohmann, the late John Scott, Susan Landale, Pieter van Dijk, Lorenzo Ghielmi, Peter Planyavsky, Wolfgang Seifen. She received a scholarship from the Royal College of Organists while studying in Cambridge, UK. Ilona participated in several international organ competitions: she won first prize in the French music interpretation competition in Warsaw, Poland; was a finalist in Leiden, Holland; semifinalist in Ireland, and in Westfield Competition in New York state.

Dr. Adler serves as the Education Chair at the Central Arizona Chapter of the American Guild of Organists, and teaches privately. She frequently performs in duo Zeelab with Jacob Adler, and in Duo Polonaise with violinist Dagmara Suchoń Hobbs. In her free time she hikes, bikes, and enjoys yoga. She is a happy mother of two sons.