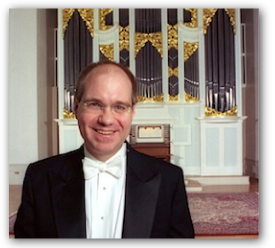 Joseph Adam holds a BMus and MMus degrees from the University of Iowa and a performer's certificate from the Eastman School of Music. He has performed throughout Europe and the United States and has won prizes in numerous competitions, including first prize at the 1991 St. Albans International Organ Competition in England. His most recent recitals have included the Cathedral of Saint Bavo in Haarlem, the Netherlands; St. Augustine Church, Vienna; and the Basilica of the National Shrine in Washington, D.C. He is a member of the American Guild of Organists' National Committee for the Regional Competitions for Young Organists and was the program chair for the 2000 National Convention, an event that drew almost 2,000 organists from around the world to Seattle and Tacoma. As part of the School of Music's Organ at Noon series, Mr. Adam performs between six and eight concerts annually in Kilworth Chapel. Mr. Adam has been Cathedral Organist at St. James Cathedral in Seattle since 1993.