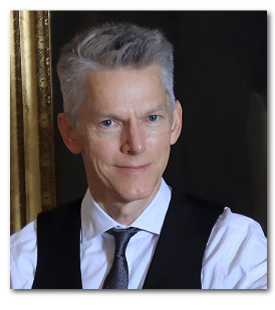 Matthew Dirst pursues a varied career as an organist, harpsichordist, conductor, and musicologist. Professor of Music at the Moores School of Music, University of Houston, he is the first American musician to win major international prizes in both organ and harpsichord, including the American Guild of Organists National Young Artist Competition and the Warsaw International Harpsichord Competition. He is also the founder and artistic director of the critically acclaimed period instrument ensemble Ars Lyrica Houston.

Widely admired for stylish interpretations of Baroque music especially, Dirst has recently won praise for his “deft sense of tempo and timing” in a “brilliant new revival of Leonardo Vinci’s Astianatte” with Ars Minerva (San Francisco Classical Voice). The Washington Post admired his “ear for detail and up-to-date ideas about performing Bach” in an appearance conducting the St John Passion, and his “sparkling direction” of Handel’s Agrippina in a “peerless production” by Ars Lyrica had “style, wit, glorious singing, and elegant design,” according to the Houston Press.

Critical reception of his recordings has been equally enthusiastic. In 2011 he received a Grammy nomination for Best Opera for conducting a landmark recording of J. A. Hasse’s Marc’Antonio e Cleopatra with soprano Ava Pine and mezzo-soprano Jamie Barton (Sono Luminus). Early Music America hailed his solo recording of harpsichord works by François and Armand-Louis Couperin (Centaur) as a “stylish, tasteful, and technically commanding performance…expressive and brilliant playing.” About his most recent recording with Ars Lyrica, The First Organ Concertos: Reconstructions of Works by G. F. Handel and J. S. Bach (Loft), Fanfare notes that “Dirst is a fluent and imaginative organist who dispatches his parts with panache.”

Appearances over the last decade include recitals and concerts for national conventions of the American Guild of Organists in Nashville (2012) and Houston (2016); a series of solo performances throughout North America of Bach’s Art of Fugue; solo and ensemble programs for the Berkeley Early Music Festival; touring performances with Ars Lyrica on prominent series in New York, San Francisco, Ann Arbor, San Diego, Tulsa, San Antonio, and Tucson; and guest conducting with the Portland Baroque Orchestra/Trinity Cathedral Choir and the Washington Bach Consort.

Equally active as a scholar, Dirst is the author of Engaging Bach: The Keyboard Legacy from Marpurg to Mendelssohn (Cambridge University Press, 2012) and Bach’s Art of Fugue and Musical Offering (Oxford University Press, forthcoming 2023); he also served as editor for Bach and the Organ (University of Illinois Press, 2016). His 2012 monograph, in the words of one prominent reviewer, it is “a compelling and readable survey, one marked by clarity, judgement and nuance” (Early Music). The 2016 volume comprises groundbreaking essays that explore various aspects of Bach’s organ-related activities, while his most recent book is the first in-depth guide to two iconic works that manifest Bach’s late fascination with counterpoint.

Dirst’s academic degrees include a PhD in musicology from Stanford University, MM in organ and Master of Sacred Music degrees from Southern Methodist University, and a BM from the University of Illinois. A Fulbright scholar to France, he received the coveted prix de virtuosité in both organ and harpsichord with teachers Marie-Claire Alain and Huguette Dreyfus and did further harpsichord study with Alan Curtis.