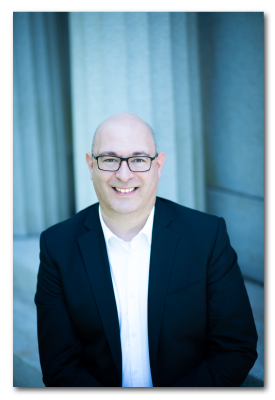 Originally from Toronto, Canada, Michael Unger is a multiple award-winning performer who appears as a soloist and chamber musician in North America, Europe, Japan, and South Korea. Since 2013, he is the Associate Professor of Organ and Harpsichord at the University of Cincinnati College-Conservatory of Music. He is a First Prize and Audience Prize winner of the National Young Artists’ Competition of the American Guild of Organists (NYACOP), a First Prize winner of the International Organ Competition Musashino-Tokyo, and a Second Prize and Audience Award winner of the International Schnitger Organ Competition on the historic organs of Alkmaar, the Netherlands. Recent solo recitals include performances for national conventions of the American Guild of Organists, Organ Historical Society and Historical Keyboard Society of North America; ‘Five Continents – Five Organists’ Festival at Seoul’s Sejong Center; Gdańsk International Festival of Organ, Choral, and Chamber Music; Internationale Orgelwoche Nürnberg – Musica Sacra; and numerous international and regional recital series. In 2018, he premiered two Preludes and Fugues by American composer Henry Martin for the national convention of the American Guild of Organists in Kansas City, Missouri. Recent harpsichord collaborations include Cincinnati Symphony Orchestra, Cincinnati Opera, Cincinnati Chamber Orchestra, Collegium Cincinnati, Catacoustic Consort, and Publick Musick, with repertoire including Bach’s complete Brandenburg Concertos and sonatas for viola da gamba and harpsichord. He received favorable international reviews for his debut solo recordings under the Naxos and Pro Organo labels, and his performances have been broadcast on North American and European radio, including syndicated programs Pipedreams and With Heart and Voice. He was a guest faculty at the 2015 and 2016 Smarano International Academies in Trentino, Italy, the 2019 Colorado State University Organ Week, and has given masterclasses at several North American universities and conservatories.

Michael Unger holds a Doctorate of Musical Arts with Performers’ Certificate from the Eastman School of Music, where he was a student and teaching assistant of David Higgs and William Porter, and recipient of the school’s Jerald C. Graue Musicology Fellowship. He is also a Gold Medal graduate of the University of Western Ontario, where he studied with Larry Cortner and Sandra Mangsen, and has pursued post-graduate coaching in Cincinnati with Roberta Gary, and in Versailles, France, with Jean-Baptiste Robin. Formerly the Director of Music at the Lutheran Church of the Incarnate Word in Rochester, New York, he currently serves as organist of Cincinnati’s historic Isaac M. Wise – Plum Street Temple.